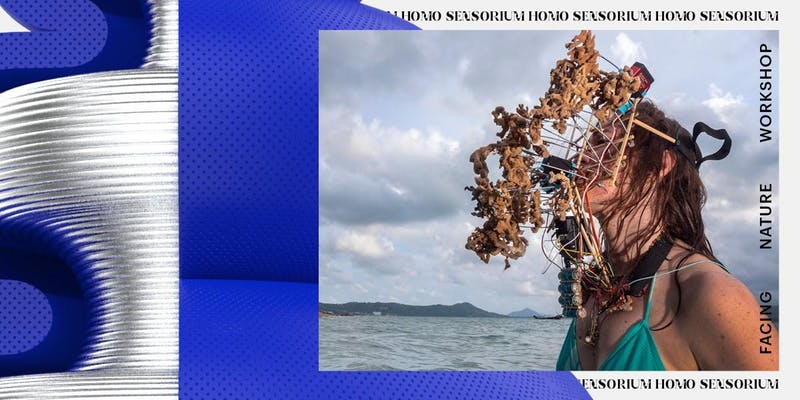 We spend most of our time indoors, staring at digital leaves and animals on our screens, aware and enraged by climate change, not realising how distant from real nature we have become. What senses can we develop to re-connect with our surroundings? What can we learn from nature’s modus operandi?

Facing Nature is a critical making workshop led by Madeline Schwartzman. By crafting speculative wearables, participants will explore ways to re-connect with nature. In this two-day workshop you will craft your own nature interfaces, through speculative wearables and facial prosthetics. These will focus above all on the head, creating interstitial structures that connect the morphology of the face with the forms of nature.

The 2-day workshop will be followed by Sensorium Talk. Artists Madeline Schwartzman, Sophia Bulgakova and Klara Ravat will talk about their practice and projects. They will focus on the blurring borders between the synthetic and organic, the real and the virtual, the human and machine, sense and perception.

The workshop will be led by Madeline Schwartzman, a New York City writer, filmmaker and architect whose work explores human narratives and the human sensorium through social art, book writing, curating and experimental video making. Her book See Yourself Sensing (Black Dog Publishing, London, 2011) collects the work of artists, interaction designers, architects and scientists who speculate on the future of the human sensorium through wearables, devices, headgear and installations. Her new book See Yourself X: Human Futures Expanded, was recently published by Black Dog Press and explores the future of the human head.

Facing Nature is part of the Homo Sensorium program during Dutch Design Week in Natlab. With a mix of experiments, workshops, talks, dinners, performances, guided tours, a brainwave wedding lab and films, Homo Sensorium investigates the future of our technologically mediated body. By focusing on sensory perception, we get closer to the essence of what it means to be human.